When my older brother, my only brother, was about to leave this world recently, I’d been certain that I knew him. But he was about to surprise me yet again.

Alan had always been full of surprises, and was hard to ever imagine keeping up with. Six years older, he always seemed to be off doing dazzling deeds, even as a kid growing up in our New York suburbs.

One of his passions then was watching Amahl and the Night Visitors, Gian Carlo Menotti's opera for television. It became an early ritual for both of us to watch while our parents were out for the evening. But Alan, who was also my babysitter during those evening performances on our black-and-white TV, had also taken notes during several of the earlierannual showings, so that by the time I was 10 years old, he’d produced a typed libretto we could sing along with from carbon copies, their title page decorated with the name of the opera spelled out in the shape of a Christmas tree: A on the first line, Am on the second, Ama on the third ....

I remember Alan as a junior high school student, when I was in first, second or third grade, and he was writing reports about Egypt and South Korea, and visiting consulates from those countries, for source material, with photos provided by their respective tourism agencies. In high school, he would visit the United Nations, and, I believe, sit in on General Assembly sessions. The UN had been created months before Alan’s own birth.

"What is the United Nations?" he in the role of teacher would ask me as we played school in his bedroom. "No," he'd correct me when I answered, "It's a building in New York City." "It's an organization. And when you visit the UN, you're not in the United States anymore!”

Alan was so outgoing and well-read as a teen that he was a regular panelist for the local library’s “young book reviewers” radio program. And at age 14, his political enthusiasm drew him to volunteer in the 1960 presidential campaign. To the dismay of our entire extended family, his boosterism was for Richard Nixon. As always, in more ways than we knew, Alan was out there.

But the greatest amazement I felt toward my brother, from the vantage point of a little kid, and even more so decades later, was his ability to easily talk to absolutely everybody ... and in that way befriend seemingly everyone.

Alan, who began talking as a very young child to his imaginary friend, our mother would later tell me, also had the ability to walk up to absolute strangers on the streets or on the subway, she related. And years later, when I awaited his airplane arrival for visits, he was consistently the last passenger off the plane because he’d typically been so engaged in conversation that he was often copying down addresses and phone numbers of new-made friends.

And so it was not all that surprising, when I visited him in the hospital this summer, shortly before his death, that he called all of his nurses by their names and could tell me who was from Sierra Leone, Cameroon, Zimbabwe -- and sometimes from which city. He charmed them all.

Charlie, the Nigerian (I believe) custodian who came in wearing a colorful cap as he swept the room each day, got a warm greeting from Alan. And as staff wheeled his bed from the room where he’d been for three weeks toward the upstairs hospice unit, the cafeteria woman who collected used trays on her cart called out, “Hey, where are you taking him? That’s my friend. I’ve known him from his first day here!”

Alan had spent his last days, we learned, arranging and delivering hand-picked graduation gifts for the daughters of his Venezualen and his Albanian friends, who — like dozens of other young people around the world, knew him as “Uncle Alan.” In the same way, he’d traveled to Toronto to attend the graduation of a friend he’d met in Korea decades earlier, and he had shown up to photograph the graduation of a neighbor from Mali. He helped some of them write their essays, just as he’d tutored some of his foreign-born neighbors and friends who asked for help with their mastery of written English.

"Alan was so dear to our hearts," his next-door neighbor told me. "We loved him!"

When the chaplain asked me, “What kind of work did your brother do?” I offered the same response I always did, with a slight chuckle: “He was a software trainer. But he really was not a computer person* at all; he was a people person.”

(*Part of that, I beieve, stemmed from our mother's somewhat anachronistic nature. She never drove, and she depended on our dad for doing everything, including the laundry. Alan reflected that aura that he was from another, less impersonal era, refusing to text and eschewing emojis. He preferred hand-written letters, long conversations, clear, colorful langiage and an emphasis on common courtesies.)

Truly, before his decades of teaching computer systems to military, National Guard and corporate clients around the country and the world — jobs that helped feed his love of travel and meeting people everywhere — Alan had worked at a job that probably best fit his character: concierge at Atlanta’s Omni Hotel, helping guests from around the world get to know one of his favorite cities, occasionally even showing them around personally.

In retirement, my brother continued some of his people-loving passions as an usher at the Kennedy Center, assisting at the Library of Congress information desk, and volunteering at the Travelers Aid desk at National Airport, where he received a commendation for running down the corridors and against all odds, insisting to airline workers that a departing flight be delayed so the wallet left behind by a distraught traveler could be retrieved from the seat where he’d left it behind.

Anywhere he worked, volunteered or in fact went about his daily errands, Alan always had an ear out for any hint of an acccent that someone might be from a foreign country. As a student and lifelong aficionado of Romance languages, he was always more than eager to discover that someone might be from a French- or Spanish speaking country. And he was eager to trot out his familiarity with Portuguese, Russian, Norwegian, Turkish or other tongues as well, as a way of meeting people.

When I was growing up, I watched with pride as my brother was chosen as our high school’s foreign exchange student. Part of his selection was based on his essay on the importance of the U.N.

That 1962 trip to Norway opened up the entire world for my brother, and after studying at Queens College and working on a master’s degree in French at University de Nancy, Alan took off as a publisher’s representative to Southern college campuses. He never looked back.

Alan and I have been different in many ways. From New York, he headed South, I headed North. He chose an urban setting for his adult life, traveled a lot, had many jobs, was very extroverted and lived alone; I headed to rural New England, kept the same job for nearly my entire career, married and raised a family.

Over the decades, I heard many, many stories of Alan’s countless close friends, and met and got to know several of them when I would visit him at his home in Washington, D.C. and later northern Virginia. I also reached out to my brother in hopes of building a much deeper relationship. Somehow, the vast array of those friends, the richness of those stories and the pressures of our busy schedules kept us from deepening the bonds we’d actually been building over the years.

It wasn’t until he was diagnosed with lymphoma in late 2020 that we began speaking to one another daily and learning how much out interests in music, books, films, politics and travel overlapped. And it wasn’t until a visit in October 2021, and then again in the spring of 2022, just before he contracted COVID and was hospitalized, that I began to realize how deeply he'd interacted with everyone around him, and how universally adored he was.

Alan was loved for constantly reaching out to friends and relatives everywhere to fully understand how each person was doing — actually listening to people and letting them know they had been heard. And then remembering every birthday and every anniversary, every illness, every trip or celebratory event with a card chosen exactly for that individual. And for each person, he brought back gifts, often hand-picked for them, from wherever he traveled.

(A simple act epitomized my brother's basic decency: his repeated request each time I visited, to please not let his apartment door slam, as a courtesy to his neighbors.)

”I look upon every day to be lost, in which I do not make a new acquaintance,” read the Samuel Johnson quotation under Alan’s high school yearbook photo, but I never realized how much Alan drew a sense of purpose from being there for every friend and each member of their entire family. That mattered deeply to him, along with being genuinely kind, and even loving, to each person he dealt with — no matter their station or their place in his universe.

As frenetic as his schedule, as far-flung his travels were, Alan's own place became clear to me as I spent those last days by his bedside. It was clear, reading him messages from friends and family everywhere, telling him how completely he was cherished as someone who truly cared. 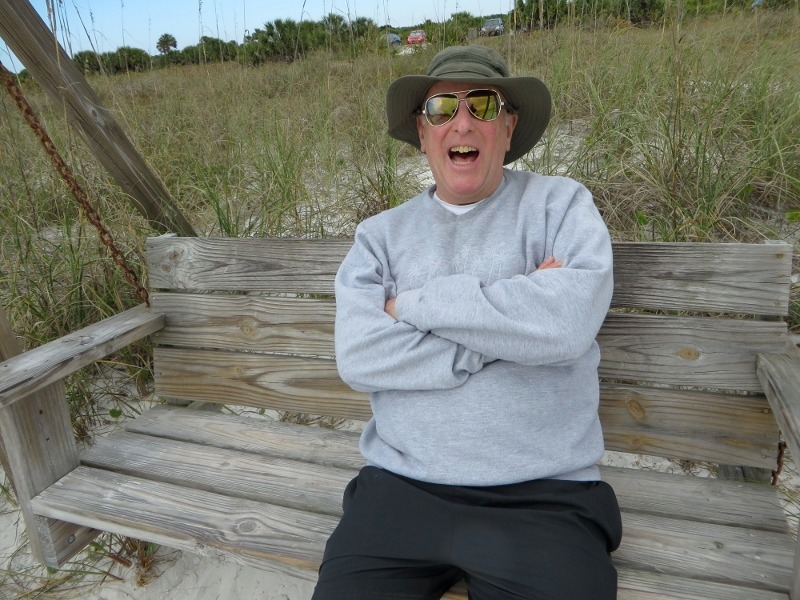 I shared those expressions with him and heard directly from friends who came in those last days just how many thought of him as their brother, as well. And I shared with him, too, how much his life aligned with the aspiration I have for my own life: He, truly, is grace.

Check out my books, Inner Landscapes and Good Will & Ice Cream